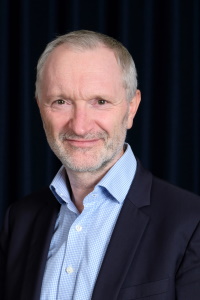 Dr. Jean Yves BERTHOU has joined Inria in February 2019 as Director of the Inria Saclay Research Center. Created in 2008, the Inria Saclay-Île-de-France research centre has 500 scientists, forming 28 research teams, and 100 staff working in research support departments. The centre is a key player in research in the digital sciences on the Saclay campus. It promotes the values and projects that give Inria its originality in the research landscape: scientific excellence, innovation and multi-disciplinary partnerships to maximise Inria's scientific, economic and societal impact.

Jean-Yves is an academic and trained researcher in the field of simulation and high performance scientific computing. He spent about ten years in public research organisations and nearly 20 years in industry at EDF.

From 2015 to 2019, Jean-Yves was the Director of Innovation of the Transformation and Operational Efficiency EDF Business Unit (6000 employees) that produce and operate the IT, real estate, purchasing, and tertiary (HR, accounting, ..) services and products for the entire EDF group. Jean-Yves sets up a dynamic approach to innovation, which in practical terms has led to the industrialization of over 250 innovations and some seventy partnership contracts with start-ups.

From 2011 to 2015, Jean-Yves was head of the digital and mathematics department (NuMa) at the French National Research Agency (ANR), in charge of organizing the selection, financing and monitoring of research projects as well as setting up European and international collaborations.

From 1997 to 2011, he occupied a variety of positions in the research department of EDF, EDF R&D. He was in turn a researcher, project leader and manager before becoming head of the Simulation programme and the Information Technologies programme of EDF R&D.

For 15 years, Jean-Yves was regularly called upon by the European Commission for expert assignments, in particular in the fields of high performance computing, open science or research and innovation strategy. Jean-Yves was part in 2016 of the European Commission High Level Expert Group on the European Open Science Cloud. He initiated in 2010 the EESI European Support Action, the European Exascale Software Initiative, www.eesi-project.eu. EESI produced a European roadmap preparing the arrival in 2020 of infrastructures, software, applications for high-end Exaflopic scientific computing. This roadmap has been widely disseminated and had large impact in Europe and internationally.